The Ogasawara-ryu Yabusame   The succession of archery and equestrian skills

The Ogasawara-ryu Yabusame
The succession of archery and equestrian skills

In addition, Kimihaya Ueno and his Ueno Family was allowed to use the clan's name of Minamoto as their surname because they are also the descendants of Yoshimitsu Minamoto who were the founders of the Kai-Genji clan.


The full mastership certificate, 'Ichiji-jyo',
given by the main branch of the Ogasawara family
who ruled the Kokura feudal domain in the Edo period 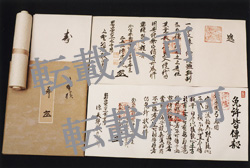 Kimihaya Ueno, called Nagamune Minamoto, succeeded as the master of Ogasawara-ryu horseback archery and now is making an effort to hand down the art to subsequent generations.

Ogasawara-ryu Yabusame Butokukai is making an effort to improve the traditional techniques and manners of Yabusame horseback archery and to train up the archers.

Butokukai is holding the traditional Yabusame exhibitions as part of the rituals of Shinto shrines around Japan, promoting ancient Japanese culture.