The history of the Buzen Kokura domain in the Edo period

The history of the Buzen Kokura domain in the Edo period

In 1615(the early Edo period), Hidemasa Ogasawara, the 19th family head of Ogasawara and the domain lord of Matsumoto in Shinanonokuni(present-day Nagano Prefecture), participated in the Summer Siege of Osaka with his oldest son, Tadanaga, and his second son, Tadazane. They successfully fought in the battle, however, Hidemasa and Tadanaga were killed. Then, Tadazane inherited the reigns of the main branch of the Ogasawara family.

Tadazane Ogasawara became the 20th family head of Ogasawara and also took over as the domain lord of Matsumoto in Shinanonokuni. In 1617, he moved from Shinanonokuni to the Akashi domain in Harimanokuni(present-day Akashi City in Hyougo Prefecture).

Tadazane Ogasawara, the Akashi domain lord, was ordered to build a castle by the second Shogun Hidetada Tokugawa. He constructed Akashi Castle in 1619 to prepare for the invasion by Tozama Daimyo lords, who were not relatives of the Tokugawa family, in western countries. 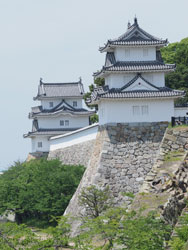 Tadazane Ogasawara fulfilled his role as the Akashi domain lord. In 1632, he moved to the Kokura domain in Busenkoku(present-day Kitakyushu City in Fukuoka Prefecture).

Tadazane Ogasawara, as one of the hereditary lords and the head of the Ogasawara lords, fulfilled a key role in the defense system of Tokugawa Bakufu against the feudal lords in Kyushu. That role was passed down to the descendants of the Ogasawara family heads.

Tadamune Ogasawara, the 32nd head of the main branch of the Ogasawara family, disclosed to the public the secret rule of decorum that was handed down only in the family and eagerly taught it to his many disciples. He also devoted his time to writing many books about the law of etiquette. Additionally, he made a great effort to pass the archery and equestrian arts inherited from Nagakiyo Ogasawara down to his disciples.