The Shinto ritual of Yabusame

The Shinto ritual of Yabusame

The Shinto ritual before a Yabusame exhibition

Shinto priests including a chief priest, the member of Ogasawara-ryu Yabusame, and many other participants in the rituals are walking in procession to a track for Yabusame.

The participants in traditional costumes in the parade attract attention from the viewers. 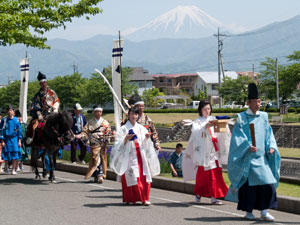 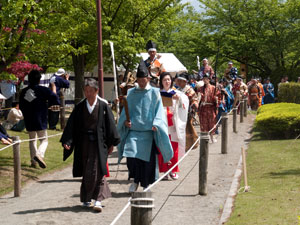 The beginning of the Shinto ritual

The Shinto ritual is provided at an altar of a shrine before a Yabusame exhibition.

The ritual is held solemnly by the chief Shinto priest, praying for the safety and the success of the exhibition. 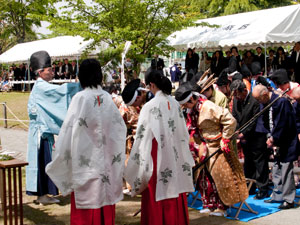 During the ritual, there is the rite of receiving a cup of sacred sake, 'Shinsyuaitai-shiki' and the rite of handing over arrows, 'Yumiwatashi-no-gi.' 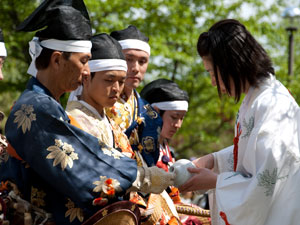 In the former rite, the archers down the sacred sake from the altar, praying for the success in displaying their highest achievements by the hard training of Yabusame.
In the latter, the archers receive the purified arrows from the chief priest, focusing on the exhibition of Yabusame. 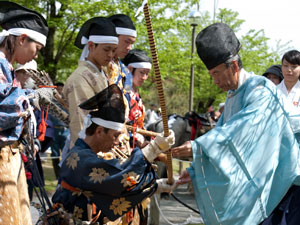 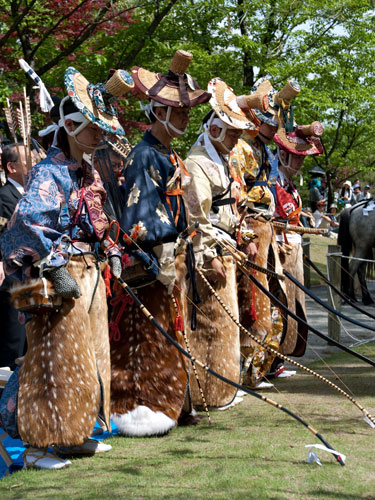 'Tentyoutikyu-shiki' is a solemn rite to pray for world peace and safety for all. And in this rite, the archer goes through a motion of aiming at the sky and the earth, drawing and readying a whistling arrow. 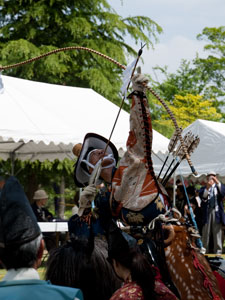 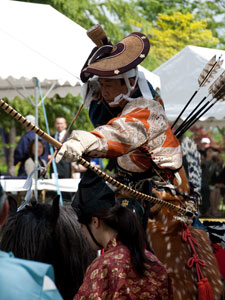 a whistling arrow for the rite

'Yosen-no-gi'is the final rite at the starting point of the track where the first archer of Yabusame prays for hitting targets successfully, throwing up a fan into the air to declare the beginning of the Yabusame exhibition. 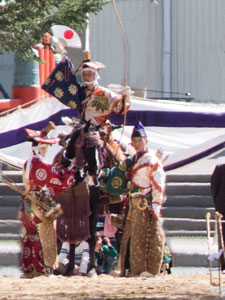 The archer launches the fan into the air and that is the starting sign of Yabusame.

The exhibition of Yabusame

The Yabusame exhibition is held at the hippodrome for Yabusame. The exhibition has two parts, 'Yabusame Hon-gi' and 'Yabusame Kisya-Hasamimono.'

The track for Yabusame is a straight field about 250 meters long.

On the track are three target boards. The first one is about 35m away from the starting point and the second and the third are set at about 90m intervals from the first one.

The track for Yabusame 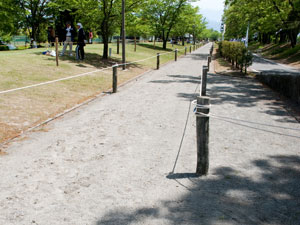 'Yabusame Hon-gi' is the main performance of a Yabusame exhibition where the archers are targeting at Japanese cypress boards measuring 40cm sq.
The three archers try to shoot three targets each.

The target: a board of Japanese cypress 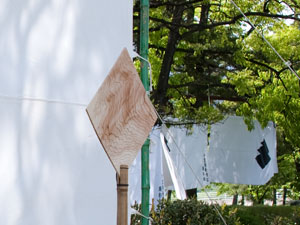 In the Yabusame Kisya-Hasamimono rite, the archers are aiming at fans as a form of entertainment.
The whole Yabusame exhibition will be finished after all three fans are hit.

The target: a fan 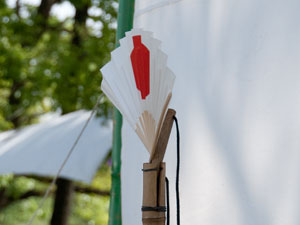 We use arrows like the one in the picture below.

The arrow used
in a Yabusame exhibition

The Shinto ritual after a Yabusame exhibition

After a Yabusame exhibition, the rite of 'Jinroku-no-jyuyo' will be held.
In this rite, the chief priest gives the best archer a pale blue flag as a reward from God. 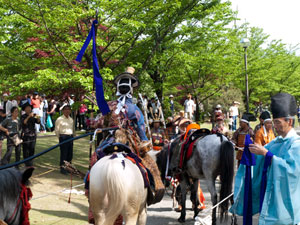 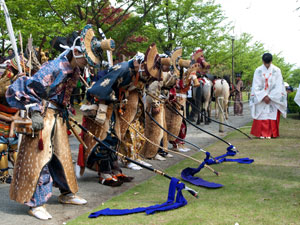 After the final rite, the whole ritual and Yabusame exhibition are complete.

The roles of the participants in a Yabusame exhibition

A Yabusame exhibition is proceeded by many participants.
The participants in traditional costumes take on each role that is called by an ancient name.

The Baba-Bugyo at the starting point should confirm the safety of the track and the preparation of the targets. After the confirmation, the Baba-Bugyo will give a sign with a large fan to the So-Bugyo who is at the end of track.

The Sou-Bugyo at the end point of the track receives the sign from the Baba-Bugyo and gives a signal to start the Yabusame exhibition. 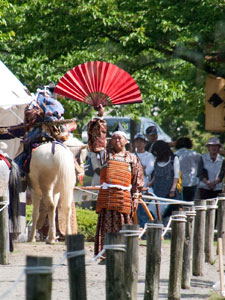 The Mato-Bugyo gives a signal to other participants when a target is hit by archers or when a new target board is prepared after the former one gets broken by impact. They are positioned close to each target. 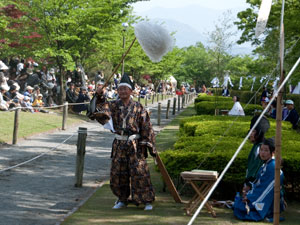 The Umamawari-yaku is a staff member who takes care of horses through the proceeding of a Yabusame exhibition. 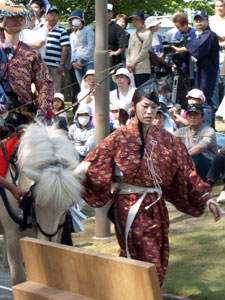 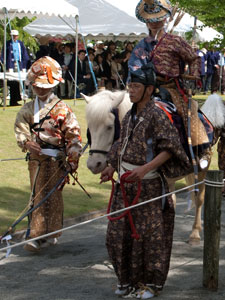 When an archer can hit the target, The Kenmi-yaku beats a drum at the center of the Yabusame track to inform of the hit to all participants and viewers.

The Nikki-yaku records on a document about who succeeded in hitting the targets and how many targets were hit in the exhibition. 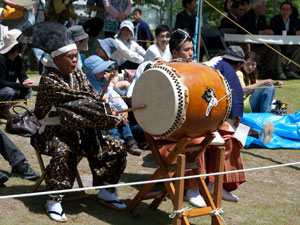 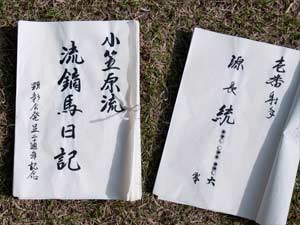 The Matogae-yaku replaces a target board that gets broken by impact with a new one. They are also positioned at each target. 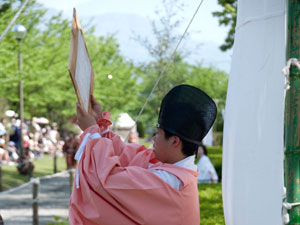 The Yatori-yaku and the Zoushiki-yaku are also positioned at each target.

The Yatori-yaku picks up arrows after shooting and shakes the dirt off the feathers, and passes them to the 'Yaukewatashi-yaku.'

The Zoushiki-yaku picks up the broken pieces of the target boards after impacts. 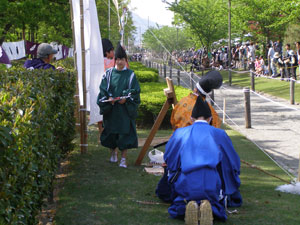 The beautiful manner of exchanging arrows attracts attention from the viewers. 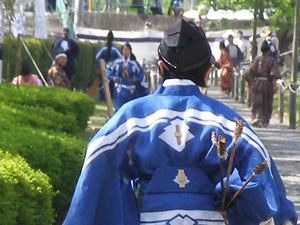 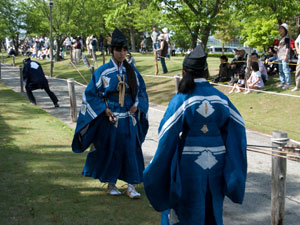 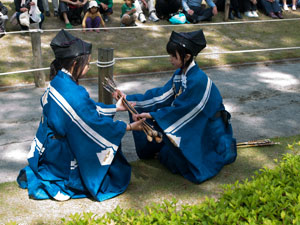 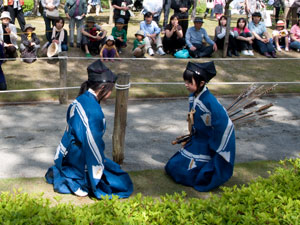